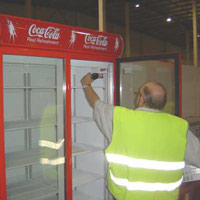 Profile
Coca-Cola Amatil is the principal Coca-Cola licensee in Australia and independently manufactures its own soft drinks and mineral waters. It is the country's largest manufacturer and distributor of soft drinks and other alcohol-free beverages, and is the market leader in the industry.

CCA entered the Australian beverage industry in 1964 and by 1990 had acquired all the Australian Coca-Cola bottling licensed territories in Australia with the acquisition of the NT plant followed in 2005.

Deployment
Coca-Cola Amatil have been using the CipherLab 8300 portable data terminals since June 2005 and are distributed throughout many of their warehouses throughout Australia including Brisbane, Sydney, Melbourne, Adelaide and Perth sites. They are used for Stocktaking of Equipment, receipting, dispatching as well as refurbishing of equipment.

Many of their warehouses are quite large and hold many pieces of equipment. Their Sydney warehouse alone is over 17,000 sq metres. It holds over 13,000 pieces of equipment including thousands of vending machines and merchandising fridges so it was important to have an accurate and reliable system of tracking for all their sites.

One of the problems that CCA were experiencing before implementing the CipherLab 8300 Mobile Computer throughout their Australian sites were that they were very labour intensive.

In Sydney alone, it would consist of 8 teams of 2 people, counting for 2 - 2.5 days. With the implementation of the 8300s in Sydney, stocktaking was reduced from 16 people to 10 people which could be carried out in only 7 hours now.

The free software that CipherLab supply(Application Generator) with all their PDTs including the 8300s, was also an integral part of the decision making that helped CCA decide to go with CipherLab. It allowed CCA flexibility and control of how they use the 8300s and their applications without having to outlay large costs for software development.

The CipherLab 8300 Terminal has proved to be a very good ROI since their first implementation in June 2005.. Their usage has ensured that business efficiencies have been improved in CCA in many different applications that they are used for. The 8300s are used everyday, in warehouses and workshop floors for CCA around the country. They get dropped from fork lifts and heavy handed users daily. They have been proven to be very durable in their robustness and reliability for CCA with only three reported terminals being returned for repairs from CCA up to June 2007. Equipment Logistics Manager for CCA - Sydney says "The CipherLab terminals have been a fantastic asset and valuable tool for our operations and have certainly made life much easier."