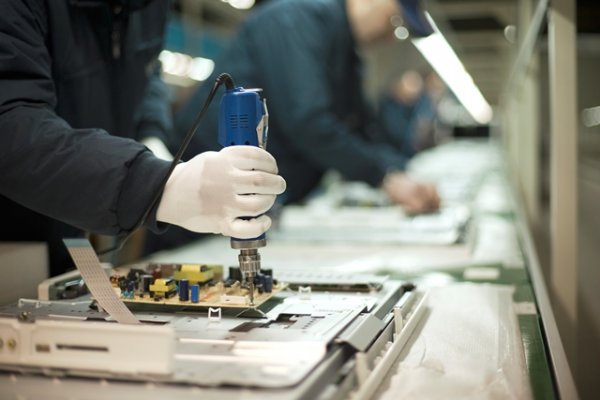 A world leading TFT LCD display company headquartered in Japan with its subsidiary located in Taiwan has adopted CipherLab's 5300 Smart Data Collector in its production line for data collection and issue detecting. The Taiwan subsidiary was formed in 2012 to advance the design, development, and manufacturing market to lead in TFT LCD display modules. With the 5300 now implemented on the production line, the factory is now realizing the importance of backend intelligent analysis and improved productivity.

The CipherLab 5300 Smart Data Collector is purpose-built for those people-based factories in the manufacturing industry that are going digital. This TFT LCD display company has implemented the 5300 to replace the original device which no longer meets their demands. With the 5300 now being set up in each station of the production line, all employees’ working time can now be very precisely recorded. This information can be used for a better analysis for future manpower plans. Aside from that, if there are some quality issues found on the TFT LCD display production line during the production process, workers can use the scanner connected to the 5300 to record the data. In this case, after the BIN code is collected by the 5300's scanner, this data will be immediately transferred to the server back in Japan. The backend office will then provide instructions to workers on the production line. By simply reading the LCD display instructions and LED lights shown on the 5300, workers will know what to do next accordingly. CipherLab worked with our partner to solve this data transmission issue, and our partner worked as an agent to connect the TFT LCD company’s MES web service and the 5300.

CipherLab's 5300 Smart Data Collector is the best solution for machine connection and data collection in order to turn a company's production line into digitalization. It has an RFID reading feature that enables it to read workers' employee cards and check and confirm personnel operating permission so as to prevent untrained personnel from operating a station. Additionally, the CipherLab 5300 series comes with cOS operating system's guaranteed stability, low power consumption and simple installation to fit any factory's environment. Most important of all, the high data integration and consolidation allow the 5300 to work alone without connecting external equipment such as environmental monitors or scanners. The CipherLab 5300 can also be highly customized according to any company's needs. One the 5300 is implemented, any company will easily be able to go completely digital.